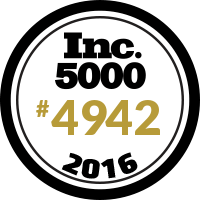 “Companies vote with their hard earned dollars,” stated Mazzanti. “For fifteen years running, our customers have chosen eMazzanti’s outstanding services and support. Making the Inc. 5000 list for the seventh time reflects their trust and our mutual success.”

“Only a tiny fraction of the nation’s companies have demonstrated such remarkably consistent high growth,” writes Eric Schurenberg, President and Editor in Chief, Inc. Magazine, in a letter to eMazzanti Technologies. “This achievement truly puts you in rarefied company.”

eMazzanti Technologies ranks number 4,942 on the 2016 list, one of only two IT services companies in New Jersey and the NYC metro area to make the list seven times. The Hoboken, NJ IT consultant, MSP and cloud services company is also ranked 31st among such companies nationally.

In making the list seven consecutive years, eMazzanti also earned the Inc. 5000 Honor Roll designation. Notably, the company has also achieved double-digit growth in each of the years since its founding in 2001.

To address the cloud computing needs of geographically disbursed customers, eMazzanti has significantly expanded its cloud services offerings in the last year. The broadened offerings include Azure-based infrastructure as a service (IaaS), disaster recovery as a service and support for SMB and enterprise customers through a cloud MSP business model.

Demonstrating the success of eMazzanti’s cloud services strategy, the company cites a 60-fold increase in Microsoft Azure cloud services revenue over the past 12 months. The Azure revenue increase is derived primarily from the company’s new IaaS and DRaaS offerings. Expansion to the West Coast, and the support of high-level Microsoft resources contributed to achieving that growth.

The new cloud offerings have expanded the size of eMazzanti’s market which has responded enthusiastically.

“The success of our cloud offerings reflects our customers’ shift to cloud computing and their embrace of Microsoft cloud technologies,” said Ervis Zeqo, Business Development Manager, eMazzanti Technologies, “We have the right solutions at the right time.”

In addition to making the Inc. 5000 list for the seventh consecutive year, eMazzanti has been recognized by a number of prestigious industry publications. The company was named as one of 200 Top U.S. Microsoft Partners by Redmond Channel Partner and ranked 150th on the 2016 MSPmentor 501 Global Edition, an annual ranking of the world’s top 501 managed services providers.

In addition, Carl Mazzanti, has been named to the 2016 ChannelPro-SMB 20/20 Visionaries list of 20 influential and farsighted MSPs and SMB partners, while eMazzanti was ranked 15th on After Nines Inc.’s ChannelE2E Top 100 Vertical Market (retail) MSPs list. Other notable designations include WatchGuard Founding Partner and Visa Global Services Provider.

Companies making the list are ranked according to the percentage growth of their annual revenue over a three-year period using 2012 as a base year. To qualify, companies must have been founded and generating revenue by March 31, 2012.